Early morning sunshine is convincing kitties that 3:00-5:00 AM is ideal for hunting. (Cats are naturally dawn and dusk hunters). Since most cats are indoor-only cats, the prey becomes thenick-knacks on the dresser, Mom and Dad’s feet, or the other cat in the house. All of the above gets Kitty into a lot of trouble, so an early morning chase begins.

This isn’t what Kitty had in mind, but it’s just as good. Let’s face it, any time a little 7 lb. creature can get a person who is 6 times his size and at least 20 times his weight out of a reclining position, then victory has to be claimed by the cat. If they actually succeeds in getting a meal out of this fiasco, then his victory is really complete and forever engraved in his memory. 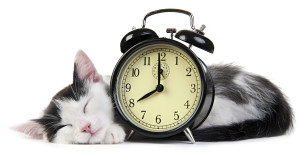 If you are one of those sleepy people who are regularly awakened by a feline alarm clock, then give some serious thought to conducting a strenuous interactive play session with Kitty just before bedtime. Fishing pole-type toys allow you to relax in a comfortable chair while Kitty runs off some of that pent-up energy. Ten to fifteen minutes is all it usually takes to wear Kitty out. Don’t stop until he is lying on his side batting at the toy (too tired to chase after it).

If you still get that early morning wake-up call, Kitty will have to have his own bedroom for awhile. This is not a punishment, just an evening routine that Kitty will learn to accept. Kitty’s room should be a comfortable temperature with a litterbox on one end and his food and water on the other end. A favorite bed, some toys, and a window perch (to watch the early morning wildlife) would also be nice. Give him a special food treat each time he is put in his room so that he soon will look forward to bedtime (and you will look forward to a good night’s sleep).

« Back to Misc. Behavior Problems