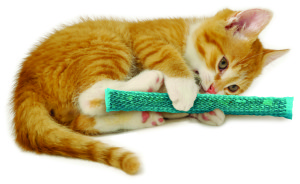 Catnip (Nepeta Cataria) is an herb belonging to the mint family which has been used by man since the days of Ancient Egypt and by cats for even longer. It has a remarkable effect on many cats, stimulating them and relaxing them at the same time. The plant is a perennial, common throughout Europe and Asia, as well as in North America where it was introduced many years ago. Its feline appeal lies in a chemical called nepetalactone which is present in its stem and leaves. Although the plant exudes its characteristic odor all the time, it is much more attractive to cats when the shoots are damaged or withered.

Nepetalactone is an unsaturated lactone that does for some cats what marijuana does for some people. Cats take off on a ten minute “trip” during which they appear to be in a state of ecstasy, rubbing and rolling on the plant. All species of cats react in this way, even lions, but not every individual reacts to it. The deciding factor is genetic. Fifty to sixty percent of adult cats show a reaction to catnip. For the first two months of life kittens are repelled by catnip. The positive or neutral response does not appear until they are three months old.

Scientists have not determined how or why the chemical substance in catnip affects cats. They assert that it does no lasting damage and that after the catnip “trip” the cat is back to normal with no ill effects. Valerian and Canadian Honeysuckle are plants that produce similar behaviors in cats.

While cat owners may have reservations about offering their cats loose catnip, they will find that catnip stuffed in toys heightens the cat’s interest in stationary toys that would otherwise be considered “dead prey”, lifeless and boring. 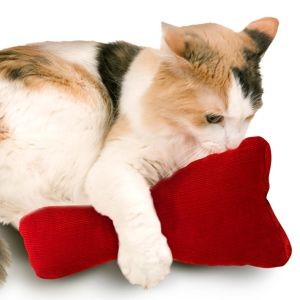 Pioneer Pet® has designed several of these toys.  Toys that have pouches for catnip offer an advantage in that they can be emptied and refilled with fresh catnip.  A new alternative to loose catnip, which can be messy, is catnip-infused plastic discs. These discs give off the smell of catnip for up to three months. Catnip toys should be stored in an airtight container with a pinch of catnip and brought out for twenty minutes play at a time. Like any herb, it looses its essential oils if left exposed to the air.

« Back to Fun For Cats