How To Get Your Cat To Love Your New “Love” 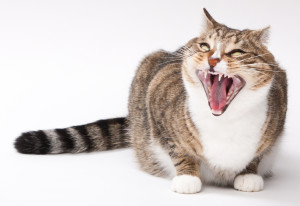 Let’s suppose that your are a woman (if you are a man, just reverse the pronouns) who has lived alone with her beloved cat for several years. You have recently met the human love of your life and now have plans to consolidate households. There’s only one small (and furry) obstacle to happily-ever-altering–Fluffy hates Prince Charming.

First of all, try to see the situation from Fluffy’s point of view. Once the apple of your eye and the recipient of nearly all of your attention while at home, now Fluffy has to wait for the Prince to leave before they get, a pat on the head or any attention at all. What’s more, this two-legged competitor is larger, has a deeper voice than “Mom”, and smells different (all very threatening to a housebound kitty). The enemy has even taken over some of Fluffy’s favorite resting places (thats the last straw!). It’s no wonder that she exhibits her stress by urinating on his jacket and hissing and growling whenever he makes an appearance.  Thats a natural response from any cat that feels threatened and their territory is being invaded.  Cats don’t like change, it stresses them. 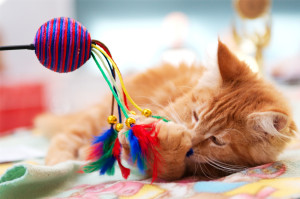 The Prince has won you over, now it’s time for him to “court” Fluffy. (This can be difficult to convince the Prince if Fluffy has already demonstrated her feelings for him in a destructive manner).  As food is always the fastest way to a cat’s heart, have only the Prince feed Fluffy. He should remain in the room while she is eating–in the beginning, the opposite side of the room. To shorten his stature, he should sit on a chair, or better yet, on the floor. If he wants to talk to Fluffy, he should talk in soft, high tones, avoiding “sss” sounds. Until Fluffy has shown some signs of relaxing in his presence, he should try not to stare directly at her.  If The Prince truly cares about you, this should not be a problem for him to try, after all Fluffy was your first.

Keep in mind the importance of the role of scent in the cat’s social life. Put a couple of the Prince’s unwashed undershirts next to Fluffy’s food dishes and favorite sleeping areas. You might consider using one of his shirts or a jacket when cuddling Fluffy. Make sure that the Prince’s after-shave or cologne does not contain animal products (e.g., m 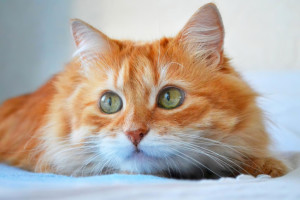 The Prince should never seek Fluffy out, but should let her approach him when she is ready. (Forcing her to confront him, will only increase her level of stress and convince her that he should be feared.) A favorite toy tied to a long pole (or a fishing pole-type cat toy) will help the Prince interact positively with Fluffy from a distance. Once she sees him as the provider of wonderful things to eat and a potential source of entertainment, she can’t help but acknowledge his usefulness. And when you see how determined he is to make friends with your other “significant other”, then you will know that you have found your soul-mate.

« Back to Aggression Towards People