How to Tame the Tiger in Your Home

The difference between cats and dogs:

There’s a tiger lurking in every kitten and cat. Just look at the way kitty stalks and ambushes your feet. Those hunting instincts are as strong as his ancestors’ who roamed northern Africa nearly 5,000 years ago. Actually, cats haven’t changed much during the time that they have been living with man; they are essentially the same in mind and body as their wild ancestors. 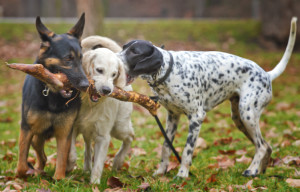 Dogs, on the other hand, have been domesticated for 15,000 years and during that time they have been selectively bred for service to man which has resulted in many genetic changes.
Dogs are pack animals – their ancestors and wild counterparts relied on teamwork to hunt and capture a meal. The pack requires that each dog has a particular ranking in the social hierarchy. All but the alpha dog must submit to a more dominant member of the pack. The family becomes the dog’s pack. When corrected, the family dog willingly conforms his behavior to suit the other pack members. Dog training is straightforward: reward for good behavior; correct for unacceptable responses.

Cats as solitary predators and have depended solely on their own hunting abilities and have had no need for group living. The idea of being corrected or dominated by another individual is foreign to them. Any attempt to punish a cat is counterproductive as it only confuses and frightens the them. Rather than associating the punishment with the crime, the cat associates the punishment with the owner. This approach to training may damage the cat’s temperament and ruin its relationship with the owner. It also may result in the cat learning owner-absent behavior. Since the corrections only occur in the owner’s presence, the cat feels free to engage in the forbidden behaviors when the owner is asleep, not watching, working or not home. 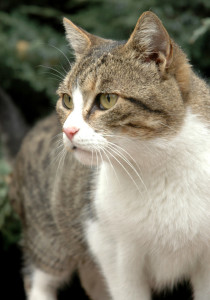 As in dog training, praise and food treats are important to reinforce desired behaviors in our cats. Problem behaviors in cats, however, are best discouraged by the use of remote correction techniques in which the environment is booby trapped so that the particular behavior becomes self-correcting. Since the behavior, not the owner, is associated with the negative experience, the cat learns not to scratch the furniture, jump on the counters, eat the plants, etc. even when the owner is absent. Fortunately for us, cats delight in routine and are truly creatures of habit, so once a bad habit is broken and replaced by a new behavior, the new behavior becomes routine.

Happy cat and happy pet people are the results of proper corrections for unwanted behaviors.