It is generally accepted that the first three years of a child’s life are the most important in determining the personality of the adult. It is also true that the handling and experiences a kitten receives during its first three months of life has a large impact on the temperament and behavior of the adult cat.

This socialization period can mean the difference between a happy cat that likes to be petted and held, is calm when traveling and is friendly to strangers or an unhappy cat that avoids human contact and is nervous and defensive.

While it may be impossible to fully compensate for a lack of socialization early in life, cats, like people, learn throughout their lifetime and may respond favorable to a systematic program of socialization later in life. Considerably more time and patience is required when working with the older kitten or adult cat.

Research has shown that gentle petting, playing, and talking to kittens during this period helps to increase their attachment to humans. In fact, forty minutes a day produces kittens more attached to their handlers than fifteen minutes a day. Early-handled kittens tend to be more confident and out-going, approaching strange toys and humans without fear.

During this period the kittens are also learning important lessons from the mother cat and their litter-mates. Kittens learn by observation and they learn best by watching their own mother. Social graces such as using the litter box are learned from mom. How to behave toward other cats is learned from interacting with siblings, occasionally Mom steps in to break up aggressive play.

Kittens that are weaned to early often play rough with people, not having learned to inhibit playful biting and scratching from litter-mates. They may also be socially handicapped when dealing with their own species later on. Some early-weaned kittens develop oral fixations – sucking or chewing on objects or their new owners by trying to replace their mother.   Kittens should not be separated from the litter until they are at least eight weeks old (ten or twelve is even better). 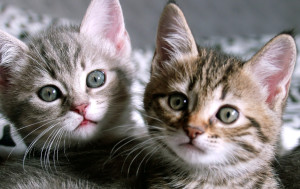 Once the kitten is away from the litter, he is ready to form an emotional bond with his human parent who now takes on the roll of “mother cat,” providing food, water, shelter, and emotional security to the baby. In order to develop mentally and physically, the kitten must be allowed to explore his world, but always under the supervision of the protective human parent.

A young kitten that is not allowed to explore his natural curiosity will grow up in fear of the unfamiliar things that surround them.  As an adult they will be nervous in new environments and unfriendly to strangers. During this acutely impressionable stage, it is extremely important to provide the kitten with a variety of positive experiences which will give him a sense of control over his world and to avoid disciplinary training or any other unpleasant experiences. (This is the time when kittens are most likely to develop an avoidance-response if subjected to physical or psychological trauma). 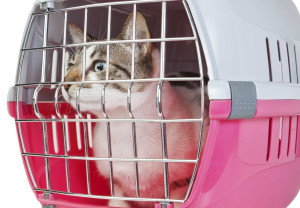 ash when away from home, if you take them with you.  Make sure he meets new people and other friendly animals. In short and sweet sessions accustom him to having his paws, ears, and mouth gently touched so that in the future he will accept handling by the veterinarian and nail-trimming and tooth brushing by you.

A conscientious effort to socialize your kitten during this critical, but brief, period will produce a relaxed and tolerant companion that you and your family will enjoy for the next twelve to twenty years.

Another way to build your kitten’s self-confidence and help them to become more extroverted is through regular 10-15 minute sessions of interactive play. While you are waving a fishing pole toy, kitty will be exercising his muscles and his predatory instincts in a constructive way. Direct the kitten’s playful aggression toward toys and away from hands and feet. Never allow him to playfully bite into the skin as he will retain this dangerous habit into adulthood when it will be more painful and injurious to his human companions. 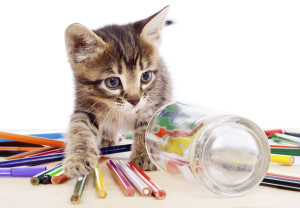 Provide him with 12 to 24 kitten-safe toys. (If it isn’t safe for a small child, don’t give it to your kitten!) Rotate the toys so that he doesn’t become bored with them. Some of the best toys are home-made: paper bags (if they have handles …. cut them so they don’t get tangled in them), the plastic rings off of milk bottles, crumpled- up paper balls, old cotton socks stuffed with cotton balls and catnip and tied in the end. 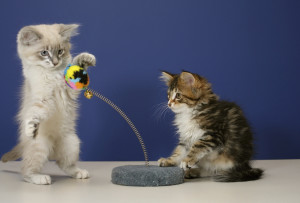 It is always a good idea to adopt two kittens at the same time. Having a playmate will not lesson your kitten’s attachment to you, but it will supply him with an outlet for his wild bursts of energy, giving you and your house a break.  Providing him with a welcome distraction from the monotony and boredom of being home along.

Feline behaviorists agree that most cats are happier and healthier if they have a feline companion.

If your kitten can walk, he is able to learn to come when called.  Just show them a wonderful food treat and call “Here kitty, kitty.” When he moves toward you, immediately reinforce the behavior with the treat and praise. (It’s best to call them by their name, they will learn quickly just what their name is)

Place a morsel of food on the top of the kitten’s sisal scratching post. He will soon discover that climbing the post can be very rewarding.

Teach him to jump to the spot where your fingers are tapping (your lap, a chair, his bed, etc.) Call him to you. Give him a verbal command while holding the treat between your fingers. Reward him as soon as he responds.  The most important thing you can give them that doesn’t cost one cent is LOVE.

« Back to All About Kittens