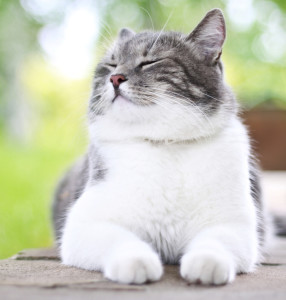 It appears that feline taste in music is as varied as it is in humans. Some cats show no interest in it, while others seem to dislike it, and still others clearly adore it. One champion of classical music claimed that his kittens preferred early Baroque selections; while a Country Western fan, naturally asserted that Hank Williams Jr. puts his cats in ecstasy. A senior citizen who routinely sets the radio station for easy-listening music before she leaves the house reports that her Siamese cat, Sam, invariably changes it to a hard rock station while she is gone. In the 1930’s Drs. Morin and Bachrach discovered to their surprise that the note E of the fourth octave had the effect of making young cats defecate and adult cats become sexually excited. It was also noted that extremely high notes could cause agitation in many cats. Apparently these varied reactions to music are related to the special sound signals that are used in feline language. Some of the high notes, for example, may approximate the pitch of the mews of a distressed kitten and may be disturbing to an adult cat, especially a female. The more erotic responses may be due to the similarity of the musical tones to the sounds elicited during feline courtship ritual. As with all things feline, nature and experience determine the cat’s reactions–in this case to music.