Fluffy is sitting by the window as usual. You pass by and gently stroke her back. Suddenly your affectionate and gentle pet has her teeth in your arm. 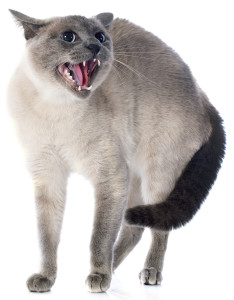 of redirected aggression can be puzzling and frightening to cat lovers. It occurs when a cat is highly aroused and in an aggressive state (for instance, by the sight of an outside cat, by just having been in a fight, or by a loud, disturbing noise), and the cat attacks a person or another animal within reach. Generally, cats do not redirect aggression unless they are touched or closely approached by another animal or person.

If a cat is in an aggressive state or mood, it can be very dangerous for the owner to approach the cat, or try to pick them  up. The owner should wait until the cat has changed its mood (calms down) before interacting with them. The state of arousal can last two hours or more, but in most cases is over within thirty minutes. After the cat has engaged in another behavior, such as grooming, playing, or eating, it is usually safe to approach the cat, their normal behavior has returned.

To treat this type of aggression, the arousing stimulus (or trigger) must be identified so that it can be eliminated. For example, if the cat is upset by looking at other cats through the window, the outside cats should be kept from passing near the window or the resident cat’s view should be obstructed by pulling a shade or keeping the cat out of the room with the windows. If the triggering stimulus cannot be removed, then the cat should be systematically desensitized to it, slowly have your cat exposed to the trigger only for very short periods of time.  In the case of a disturbing noise, it should be repeated at regular intervals at very low levels until the cat is used to it and then the volume gradually increased, always keeping it below the cat’s stress threshold.

If the pet parent is the victim of redirected aggression, it is important that you not retaliate so strongly that the attacking cat develops a fear of you and becomes defensively aggressive toward them, thereby creating another, more difficult problem to solve. Keep in mind that it is the cat’s predatory nature that enables it to concentrate so single-mindedly on a particular object, sound (or animal) of fear. This all-consuming focus of the cat’s attention is not easily transformed into a recognition of the touch of an old friend–so don’t take it personally!

« Back to Aggression Towards People