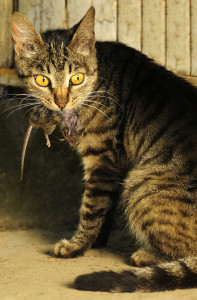 The wild counterpart of the domestic cat has a large territory, with males patrolling about 150 acres and females, about 15 acres. With the provision of food by humans and the elimination of the mating behavior (by spaying and neutering), the territory of our house cats can shrink to a fraction of the space utilized by their country cousins. The wide variation in the size of feline territories is a tribute to just how flexible the cat can be. There is a limit, however, to what even the most adaptable cat can handle, especially when the already restrictive environment is diminished further by the addition of multiple feline companions. (An average-sized home with three indoor cats has a feline density of about 30,000 individuals per square mile.)

It’s hard to see life from the cat’s point of view, but try to imagine yourself living in a society where there were no property rights. Anyone could move into your home at any time without your permission. The first new residents might be kind of fun to have around as company. As the population increased, you found that you were in competition to use the bathroom, someone was always eating the food you had saved for your supper, and even your bed was occasionally claimed by a newcomer. Do you think that this situation would make you frustrated and irritable, stressed to the point that even your friends might want to avoid you?

It’s no surprise that tensions occasionally erupt in multi-cat households. Cats adapt to living with one another to varying degrees. In some cases intercat aggression can escalate to the point where certain cats become social outcasts, or “pariahs”. These frightened felines may be so intimidated that they won’t leave their hiding places to eat or use the litterbox. Even a cat that tolerates several housemates may become aggressive with the addition of one more cat.

If you have given careful consideration to the effect of the addition of a newcomer to your cat family and you feel that they can handle one more, then here are some suggestions to make the turf more “cat friendly”: