The Cat’s View of Territory

Cats are territorial animals. In the wild, a cat establishes an area where it sleeps and eats–its home base–and where it hunts and mates–its home range. The territory radiates from the home base and its size generally relates to the availability of food. If food is plentiful, it does not need a large home range, but if food is scarce, it does. The cat’s territory consists of a network of paths that are patrolled regularly on a fairly fixed schedule. Cats mark their territory by: 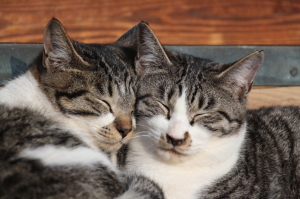 The spraying, urine and feces marking provides other cats with information about the individual cat (eg., sex, age, health) as well as when he was last there. Marking posts are read like a newspaper and read frequently. The marking behavior doesn’t repel others, but it does result in time sharing of the territory.

Cats work hard to avoid chance encounters with other cats which could lead to fighting and injury. As solitary predators, they rely entirely on their own ability to catch prey. If their hunting skills are impaired, they cannot survive. Marking behaviors allow a number of cats to share the resources in a territory without ever having to compete directly with one another. For example, one cat may occupy a spot in the morning but leave it for another cat to occupy in the afternoon.

The cats in your home establish territories just as their wild counterparts do. You might find it interesting to note where each of your cats rests at different times of the day and then check to see if this pattern holds true over a period of a few days. It would also be interesting to see which cats time-share with which other in the house. A recent study of time-sharing in a house of 14 neutered and spayed cats found that cats seem to choose their time-shared spots with specific individuals of the same gender. (The exception was mother cats who time-shared with their male kittens.)