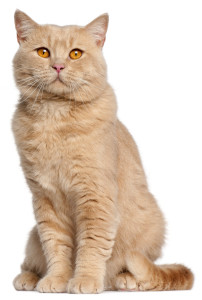 If we define intelligence as “the ability to acquire information, retain it, and utilize it to solve problems,” the cat is clearly the winner of all our companion animals. Try putting an adult cat in a room in which he has never been before and watch how instinctally every nook and cranny is carefully examined. This need to do “basic research” as one behaviorist puts it provides the cat with valuable, even life-saving, information about his surroundings. Actually, curiosity didn’t kill the cat, it gave him a reputation for having 9 lives!

We know that the ability of cats to investigate new environments is legendary, but it has also been proven that their ability to retain information is superior to that of other domestic animals. In a test of canine-versus-feline intelligence, Dr. Maier, professor of psychology at the University of Michigan and Dr. Schneirla, curator at the Dept. of Animal Behavior, American Museum of Natural History, compared I.Q. as a function of memory in dogs and cats. Both species were shown a large number of boxes and taught that food could only be found under the one with a lighted lamp on top. Once the training was complete, researchers turned the lamp on briefly. Then to test the animal’s memory, the researchers prevented them from going to the box for a period of time. Canine recall lasted no more than five minutes. Cats, however, returned to the correct box as long as 16 hours later, exhibiting a power of recall superior to that of monkeys and orangutans. 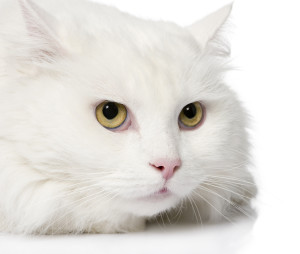 The cat’s intellectual ability is highlighted by its ability to use the information retained to solve problems. Cats are able to form “learning sets,” a skill once thought to be confined to primates. For example, cats that were trained to pull boxes on wheels showed they could combine that skill with their own insight to solve new problems. In one instance, a cat pulled the box to a specific location and used it, step-stool fashion, to reach a desired reward: a piece of food suspended from the ceiling by a string. The full extent of the cat’s cognitive abilities is still largely unknown, but they continue to amaze their owners with their ingenious abilities, nevertheless.

Cats learn by observation, imitation, trial and error just as humans do. Stories abound which describe cats turning doorknobs to open doors, ringing doorbells, opening cupboards, turning off lights, and even using the toilet solely by observing the owner performing these activities. Many feline behaviorists as well as child psychologists seem to agree that the intelligence of an adult cat equals that of a 2 to 3 year old child. We know how clever and manipulative children of this age are, is it any wonder that cats are better at training their owners than the owners are at training them?

While the cat is the most intelligent of all our domestic animals, it is important for cat owners to be clear about the limitation of their cat’s thought processes, as attributing human motivations to the pet can interfere with the patient, methodical, approach necessary to treat behavior problems. For example, a cat cannot ponder the past or make plans for the future. It is therefore useless for an owner to punish a cat for something it did even a few minutes earlier or in the act, because the cat is incapable of making the connection between the action and the punishment. Conversely, its actions can not be motivated by revenge for some past insult by the owner. Stress caused by the owner’s actions, and not spite, is the culprit here.

All cat behavioral problems are human induced, not providing a cat what they need to instinctually act and behave like a cat can have very bad recourse to the human.