In order to solve behavior problems it is necessary to understand what causes stress in cats as well as what reduces stress in cats. Stress is a critical factor in most behavior problems, whether the problem is inappropriate elimination, destructive scratching, over-grooming, excessive vocalization, aggression, or a variety of other unsettling  behaviors. When threatened, cats,  have four major defense strategies:

Unlike dogs, cats rarely choose appeasement. Prolonged anxiety reactions are commonly provoked by a threatening situation which cannot be dealt with by flight, fight, freeze, or appeasement.

It is sometimes difficult for us as humans to relate to what stresses felines. Deadlines, grouchy bosses, work overload, and computer crashes are so unlike feline concerns: an animal viewed from outside (territorial invasion), a change in the environment (eg.,new furniture, new home, new litter substrate), change in daily routine, strange scents (eg., cat or dog scents on family members), loud noises, a dirty litterbox, the angry or hostile behavior of the owner, overcrowding, new family members (people or pets), the absence of certain family members, etc. Even the boredom of living in an unchanging environment can be stressful to our intelligent and sensitive feline companions. 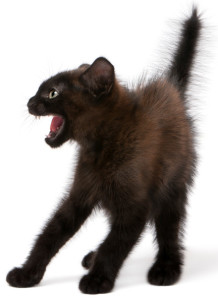 The term stress is used by veterinarians to describe the mental and physiological changes that occur in an animal when it perceives something potentially threatening. The threat triggers a flood of activity in the cat’s autonomic nervous system–the portion of the nervous system that controls involuntary body functions such as heart rate, blood distribution, and respiration. The biological changes that occur prepare the animal to either combat or escape the challenger. For example, “the pupils dilate to admit as much visual information as possible and tiny muscles in hair follicles contract, causing the cat’s fur to stand erect and make the animal look bigger and more intimidating. Mood changes often accompany the physiological changes. The animal may become extremely alert and behave aggressively toward anything (or anyone) that approaches too near.”

The stress response can be life-saving to cats living in the wild, but the indoor cat rarely needs the protective benefits of this physiological reaction. When the stress is caused by a known problem (eg., another cat) and that challenge has been met with either fight or flight, its fear subsides and its bodily systems revert to their normal “unstressed” state. “But when a cat can’t recognize the source of its fear (for instance, random loud noises from the construction workers next door) or can’t avoid a recurring source of fear (a resident feline bully), its fear can lead to anxiety…the anxiety can become chronic (recurring or continual)…Because an indoor housecat can neither flee nor confront the source of its anxiety, it cannot easily relieve its stress. The cat must either live with its stress-response or act out behaviors in its stress-response repertoire to try to relieve the anxiety.” 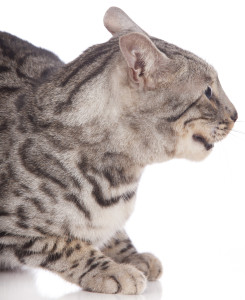 A cat that is in a chronic state of anxiety can experience health problems as well as behavioral changes. One indication of stress is high concentrations of the corticosteroids (hormones secreted by the adrenal gland) in the blood and/or urine, particularly cortisol. If large amounts of the hormones persist in reaction to chronic stressors, the result can be illness or even death.

« Back to Overcoming Stress