Which Litter is Best For Your Cat?

Since Edward Lowe first placed granulated clay in a bag and called it Kitty litter, the multimillion-dollar cat litter industry has produced an astounding array of litter substrates. While most of the litters on the market were clay-based, there is a growing interest in “alternative” litters. These litters are made of a variety of unlitter-like compounds, such as: paper, corncob, orange peel, wheat, wood, grass, silica, walnuts and peanut shells. All cat litter manufacturers claim that their products are highly absorbent and great at controlling odor, so how is it possible to choose one among so many? 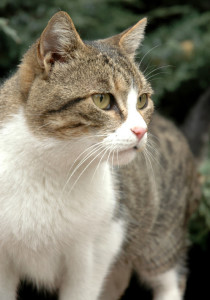 First of all, look at the choices from your cat’s point of view. Too many cat owners select products for their cats based on human, rather than feline, preferences. This approach often backfires as the cat may find that the new purchase offends his natural instincts and refuses to use it. We know that cats have an inborn drive to seek out an easily-raked substrate in which to eliminate. Our domestic cat’s ancestors used sand and a soft soil. Studies show that 9 out of 10 cats prefer the sand-like texture of the clumping litters. This shouldn’t be too surprising considering that the paw pads of an indoor cat are sensitive and tender. (Would you rather walk barefoot on a gravel driveway or on a sandy beach?) See “The Truth About Declawing“.  Declawed cats especially require the comfort afforded by a clumping litter as more of their weight rests on their heels than on their shortened toes. (The declaw surgery involves severing, not just nails, but whole phalanges–up to the first joint–including bone, ligaments, and tendons.)

We also know that cats want their indoor bathrooms to meet the same requirements of outdoor toileting areas, even though their little paws may have never touched the good earth. Observations of outdoor cats show that each time they eliminate, they look for a clean area (unlike dogs which like to use the same locations). Dirty litter boxes are a main reason for cats to eliminate outside the litter box. Perfumed litters do not add to the cat’s enjoyment of the litter box, nor do they fool the cat into thinking that the box is acceptably clean (although they may fool the owner). Perfume is actually a repellent for cats, this will keep them from using the box. 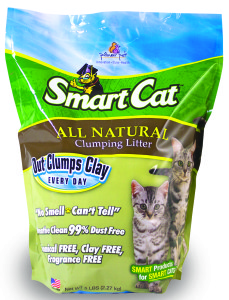 All clumping litters are not created equal–some clump better than others. Usually, the better litters are also somewhat more expensive than the others. The cheap clumping litters that break up easily should be scooped daily and dumped out entirely twice a week. The best clumping litter sold on the market, such as SmartCat® Natural Litter makes the job of litter box cleaning quick and simple. If scooped out daily, the cat can enjoy a clean, dust free fresh-smelling litterbox every day, so can you.

Tips on the proper use of Litter.

Clay is still being used with people thinking it absorbs most of its weight in moisture, it doesn’t clump at all.  Cats do not like stepping on wet litter and wet litter has an offensive smell to cats as well as to humans. Keep this in mind if you are considering an alternative box filler. The strange texture and smell of the new substrate may also put off your cat. If they don’t recognize it as being an appropriate substance in which to eliminate, they will either try to hold their  urine (which may precipitate a health problem), or they may find the living room carpet more to their  liking.  This choice will create another whole set of problems. 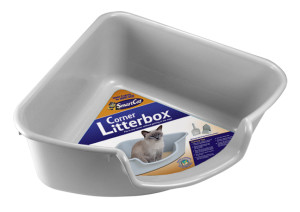 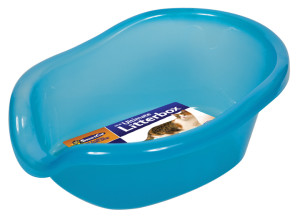 If you decide to introduce a new litter to your cat, put it in a new litterbox. We recommend one of SmartCat litter boxes  for a change in shapes The Ultimate Litter Box™ or the Corner Litter Box™.  Keep the old boxes the same until you see that the cat is using and liking the new litter. Let the cat discover it for themselves–don’t force them to go into it. You may take some urine or stool from another box and put it in the new box to give them the idea that this is for them. Once you decide on a litter you both like, don’t change it, even if another litter is on sale (that is, unless you really like cleaning the carpeting!)  Cats just don’t like change, being especially sensitive to their litter box.